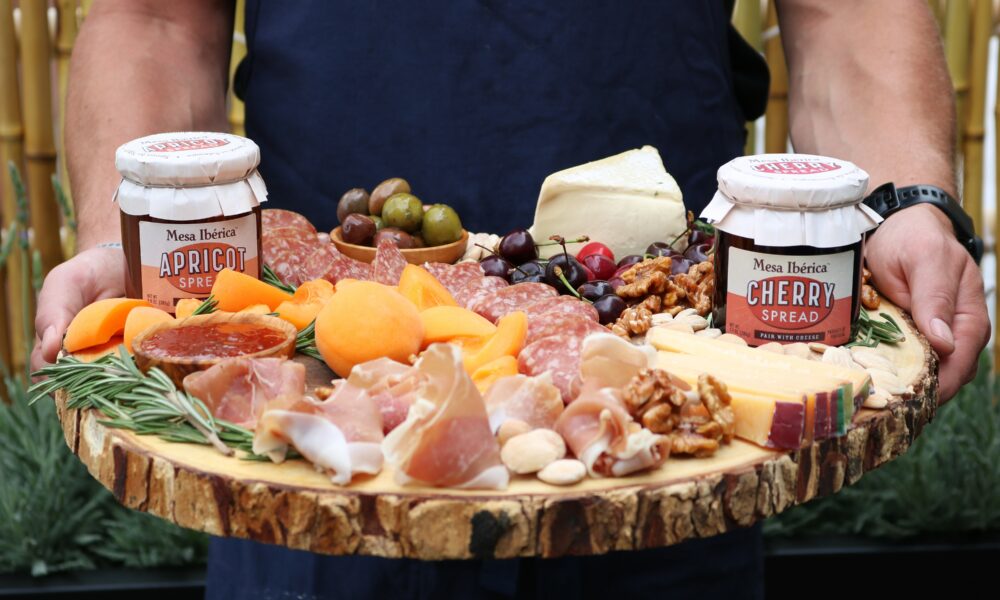 If there’s one food trend we can stand behind, it’s cheese boards. A quick look to Google searches for “Cheese Board” shows just how popular they have become:

Those two-pronged spikes you see happen every year for Thanksgiving and Christmas, which are both right around the corner. Now is the time to make sure your cheese department is stocked with all the accompaniments you need! To that end, we have recently launched Mesa Ibérica, a comprehensive line of sweet spreads, nuts and tortas that will be the highlight of any cheese board.

It took our purchasing team a long time to find the right supplier for our line of fruit jams and spreads: we firmly believe it was worth the wait. Crafted in sun-swept Portugal, our five Mesa Ibérica spreads contain no artificial flavors, preservatives or questionable ingredients such as corn syrup. Their sweetness relies on the ripeness of the fruit they are made of, and the smallest amount of sugar we could muster. In fact, they contain so little sugar we legally had to call them spreads, instead of “jams” or preserves (thank the FDA and USDA for that naming convention!). 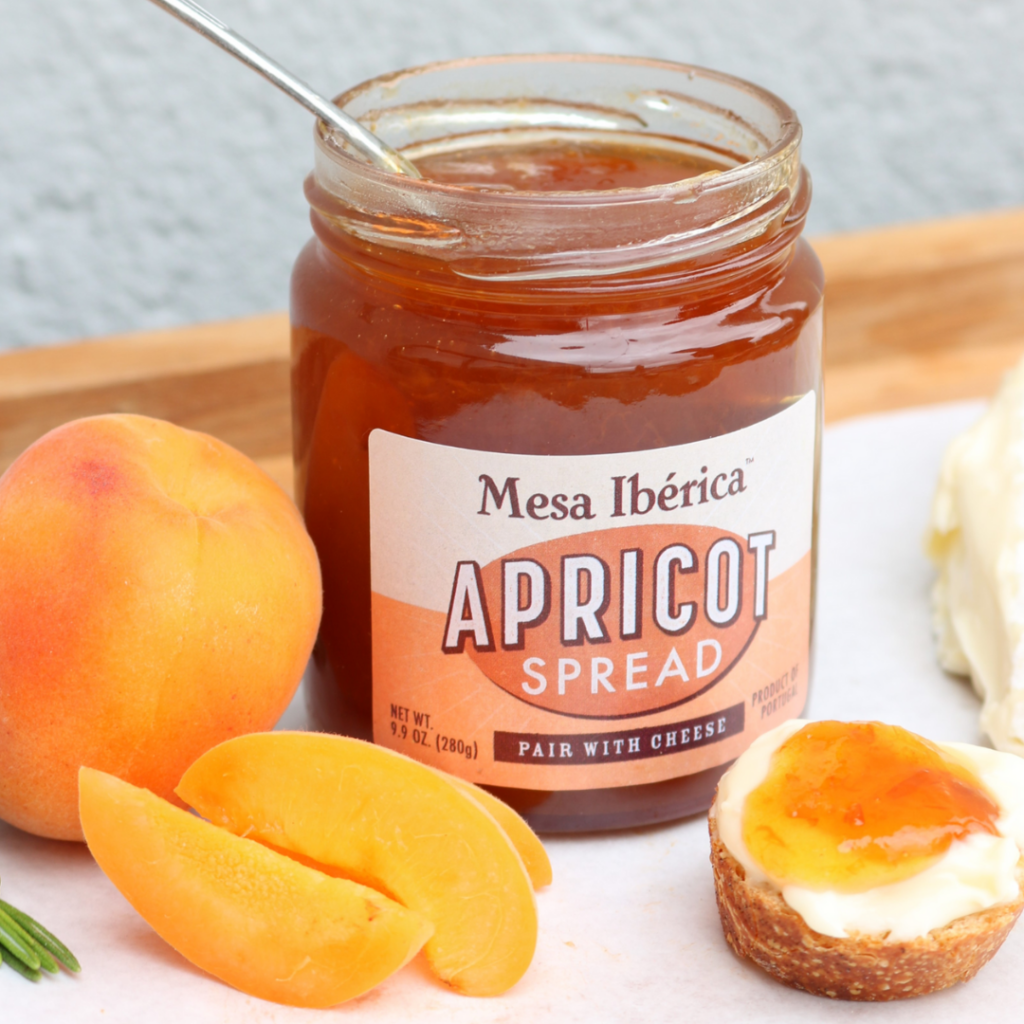 Imagine a perfectly ripe apricot in all of its fruity, sweet and bright glory. Cook it down with some sugar to concentrate its flavor, and you’ve got our Mesa Ibérica Apricot Spread! We believe it to be one of the most versatile spreads in our collection, along with the more classic Fig.

Pairing: the natural acidity of apricots are fantastic to cut through the richness of a triple cream brie or any other rich, creamy soft-rind cheese. We’re also partial to spooning it on a “stinky” washed rind such as Taleggio. 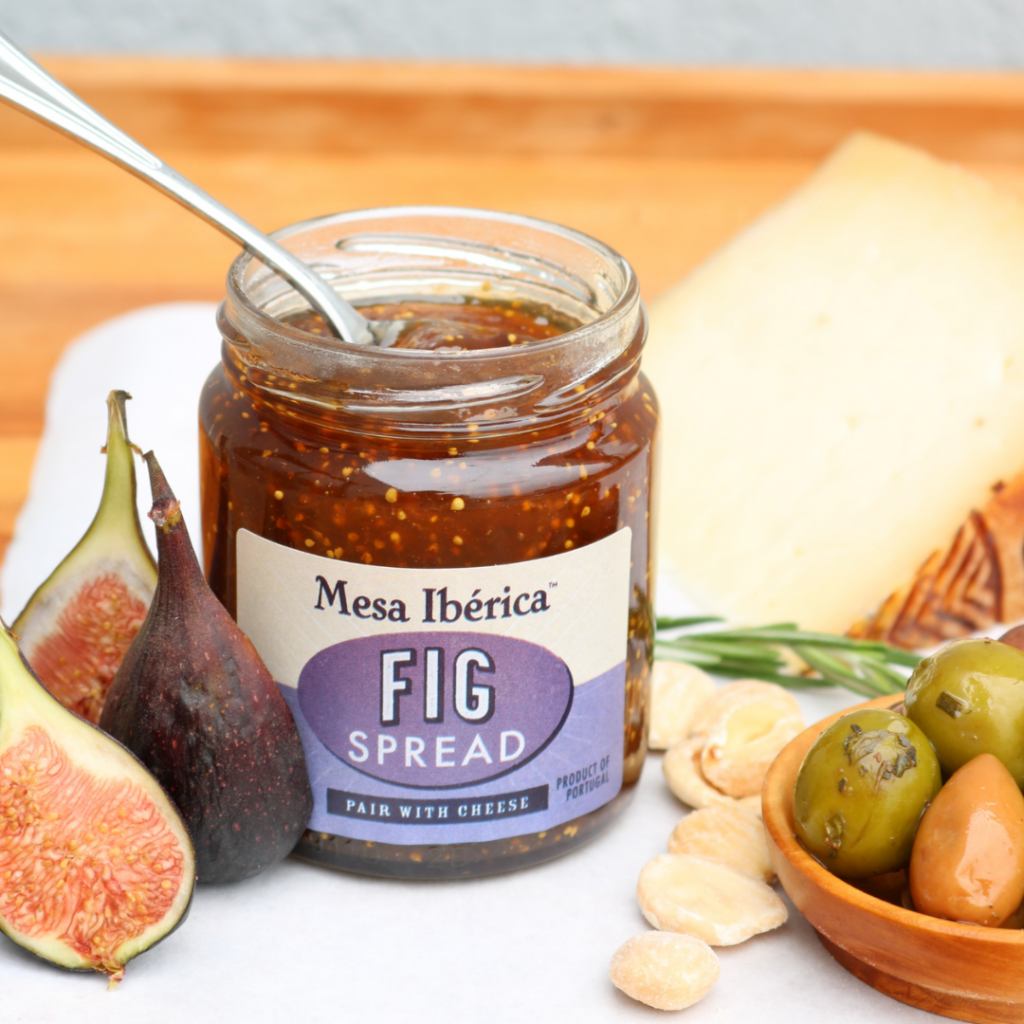 Fig may be the first jam flavor your think of when pairing jam and cheese, and for good reason. The rich, round flavor of fig pairs exceptionally well with dairy as well as cured meats such as prosciutto.

Pairing: We like it as a lush counterpart to a bright and lemony young goat cheese such as Montchevre, or with a double-cream brie. 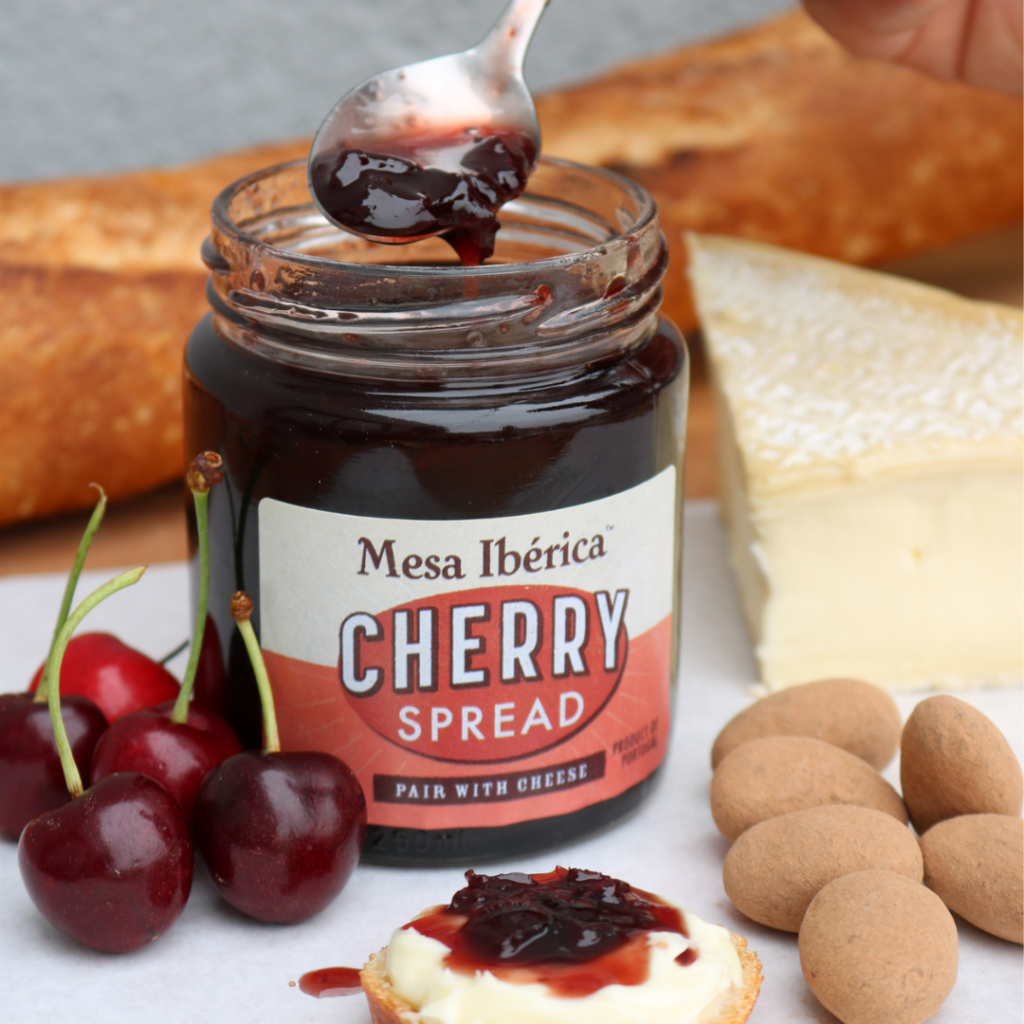 The best adjective we found to describe this Cherry Spread would be lip-smacking. Candied bits of cherry bring a delightful texture to a smooth, silky and rich spread base.

Pairing: Cherry jam is often used in the Basque region as a counterpoint to citrusy sheep’s milk cheeses. Follow their lead by pairing it with a smooth Petit Basque, Ossau Iraty, or Aged Manchego. It’s also particularly decadent on a fresh Burrata. 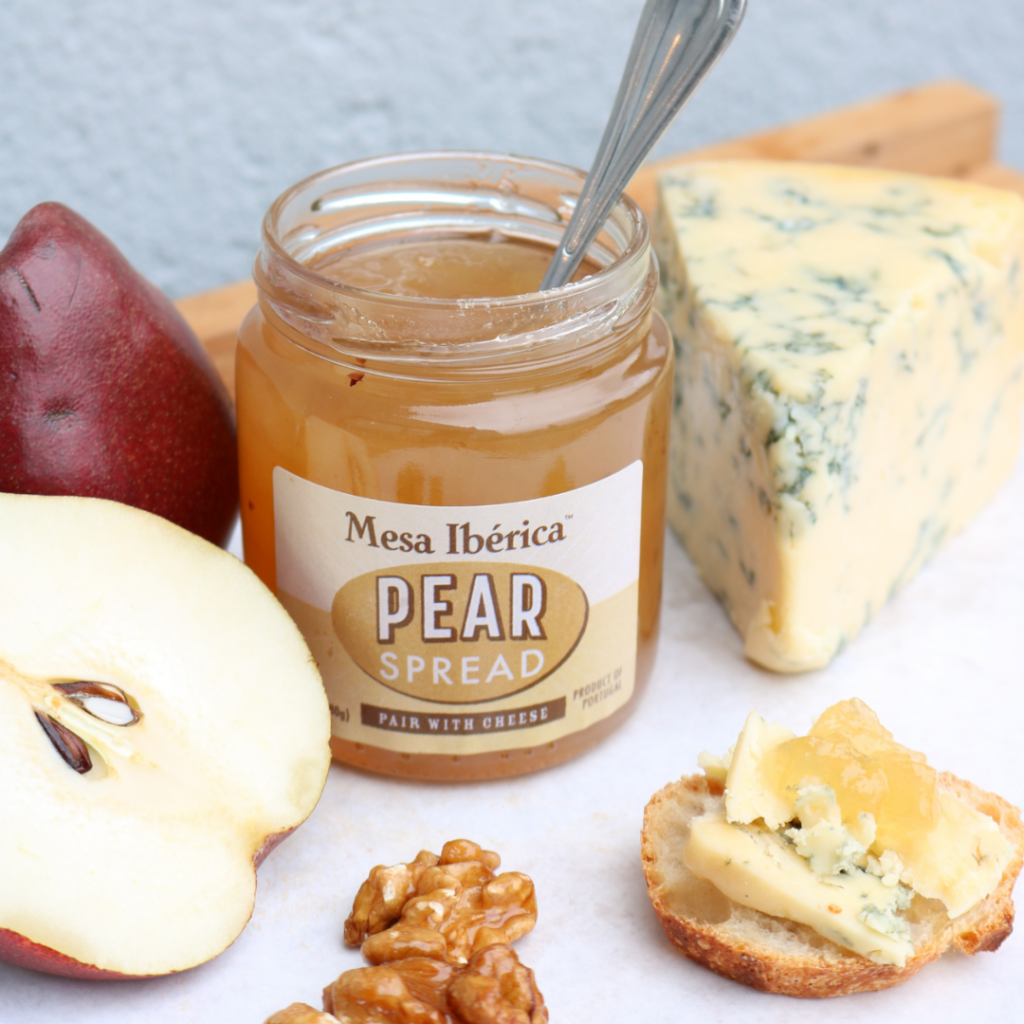 Mellow and aromatic with notes of vanilla and spice, Pear spread is an unusual yet profoundly delicious addition to a cheese board. Its mild and almost floral aroma brings out all sorts of interesting flavors in the cheese it accompanies.

Pairing: You cannot go wrong with a classic Blue & Pear combination. We are partial to mellow blues such as a British Stilton or a French Fourme d’Ambert. A nutty gruyere would also be an interesting combination. 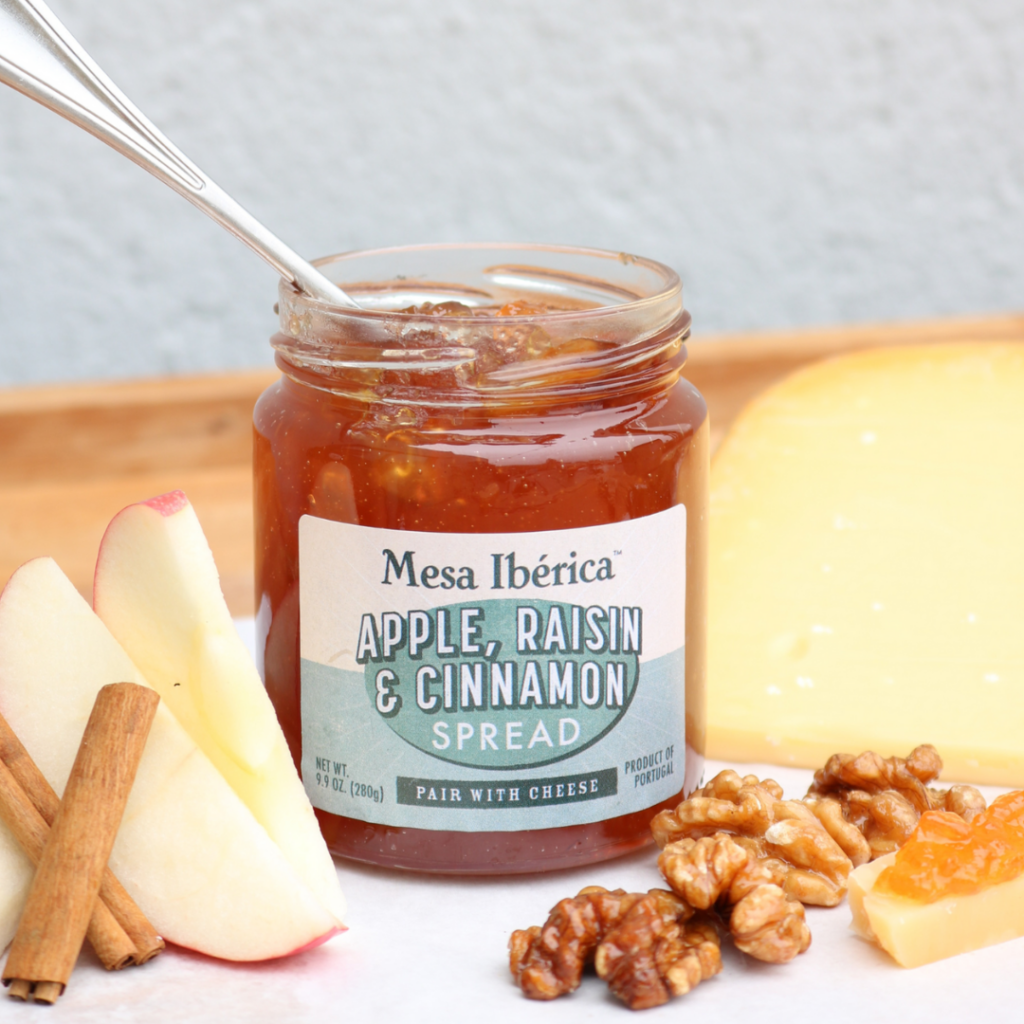 The sleeper hit of this spread collection! This chunky spread tastes just like the filling of your favorite homemade apple pie or tarte tatin, with the added intrigue of mellow, plump raisins. The cinnamon flavor is quite subdued, but manages to highlight the spicy flavors of any cheese you pair it with.

Pairing: If you’ve never understood the hype about pairings, we urge you to try a dollop of this spread with an aged Gouda such as an 8-Month Artikaas. The apple spread plays off the nutty, spicy flavor of the gouda for a true flavor explosion. If you’re looking for a hot application, look no further than a Cheddar Grilled Cheese – we are partial to Ford Farm’s excellent Coastal cheddar.